Cryogenic shrouds, or cryopanels, are essential to the UHV chamber. Within the vacuum chamber there are two cryopanels that may be filled with LN2, the growth cryopanel and the source cryopanel. The growth cryopanel surrounds the wafer holder and helps cryotrap contaminants near the wafer. The source cryopanel has openings for each material source, allowing molecules to pass through and reach the substrate. These cryogenic shrouds provide thermal isolation for the material sources, allowing the temperatures to be controlled independently and ensuring consistent evaporation of molecules.

It is important to note that the process for MBE requires the cryopanels to be continuously wetted with LN2 closed loop circulation with a constant flow. The closed loop process features gravity fed LN2 from a liquid/vapor phase separator. Feed and Return Lines connect from the bottom of the Phase Separator and run down to the various MBE connections via vacuum insulated flexible piping. A feed line supplies LN2 into the MBE, while a return line brings the mixture of LN2/GN2 back to the separator where gas exits out of the separator vent and liquid circles back in the separator for reuse. The bayonets that are in each of the phase separator lines are designed to only allow flow from a separator into a supply line and not into the return line.

The result of the MBE process is a compound semiconductor thin film on the wafer. The wafer will then undergo processing in a fabrication facility, often resulting in an integrated circuit or microchip, commonly found in computers and cell phones. MBE systems use a lot of liquid nitrogen and it is recommended to have one phase separator per MBE. One pair of feed/return lines are normally the minimum for any MBE but large production systems can have up to four pairs of feed/return lines on a system. Some MBE manufacturers offer vacuum insulated connections (TAL or close tolerance bayonets) to the MBE to reduce icing and heat gain.

CryoWorks offers assorted system options to improve the performance of your MBE:

Valves: CryoWorks Valve line offers a broad range of vacuum insulated and non-insulated cryogenic valves that exceed highest industry standards. Our valves ensure reduction of production loss by eliminating the potential for the valve to ice up with no fluid flow.

Bayonets: CryoWorks bayonet connections consist of a male and female connector that can easily be installed without any field welding or unique training. The tight-fitting male and female bayonet design provides a long heat path from the outer jacket to the inner pipe, this creates a low heat leak connection. CryoWorks offers close tolerance fit bayonets as well as dissimilar metal tip bayonet types. Our bayonet connections also have a low-profile flange to simplify installation allowing pipes to slide through hangers and supports easily. This low-profile also decreases core hole diameters and required sealant. 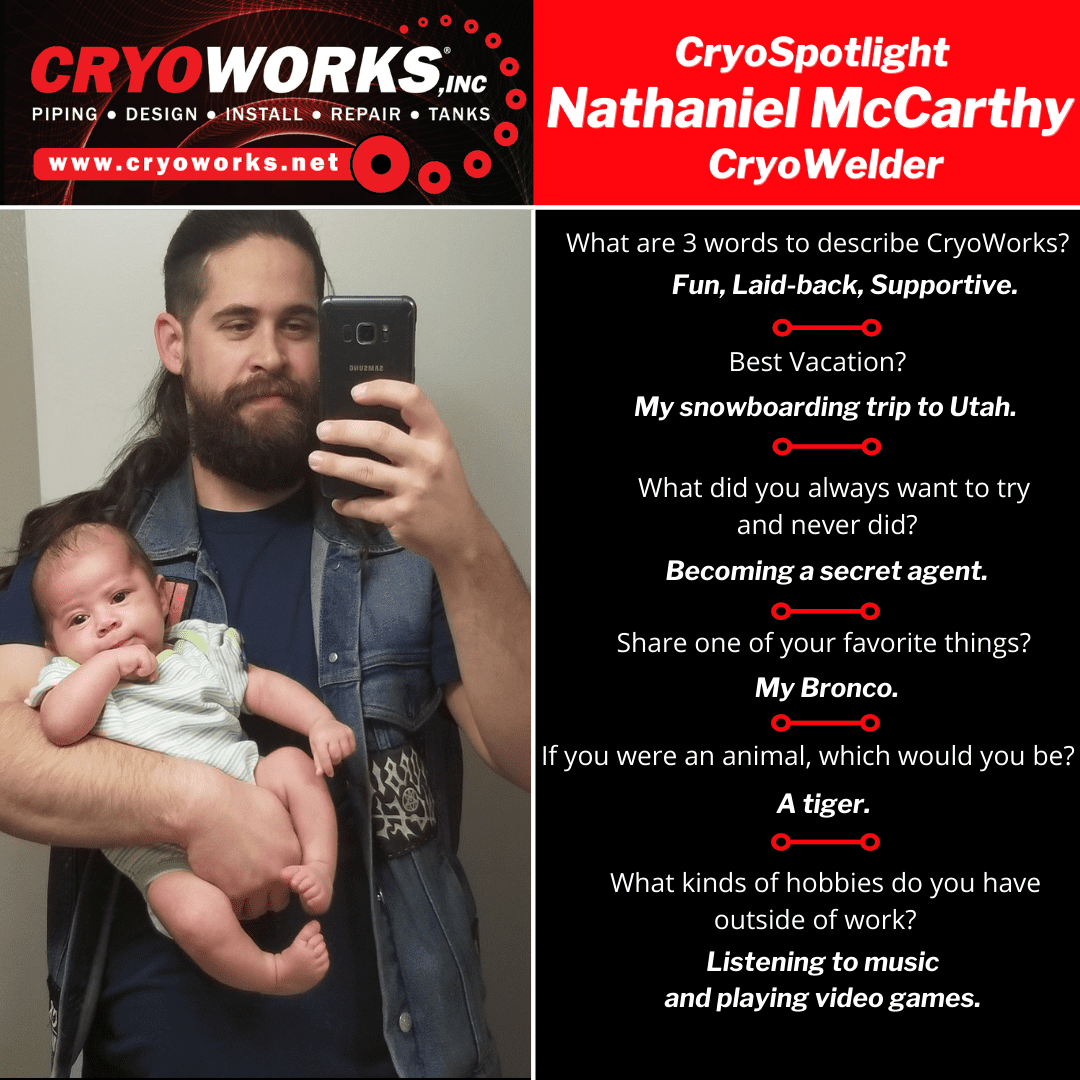 CryoSpotlight Getting To Know The People Behind The Pipes: Nathaniel McCarthy

This month we shine the CryoSpotlight on our CryoWelder, Nathaniel McCarthy! Since joining our CryoWorks family in 2020, McCarthy describes it as a “fun, laidback and supportive” environment. In the 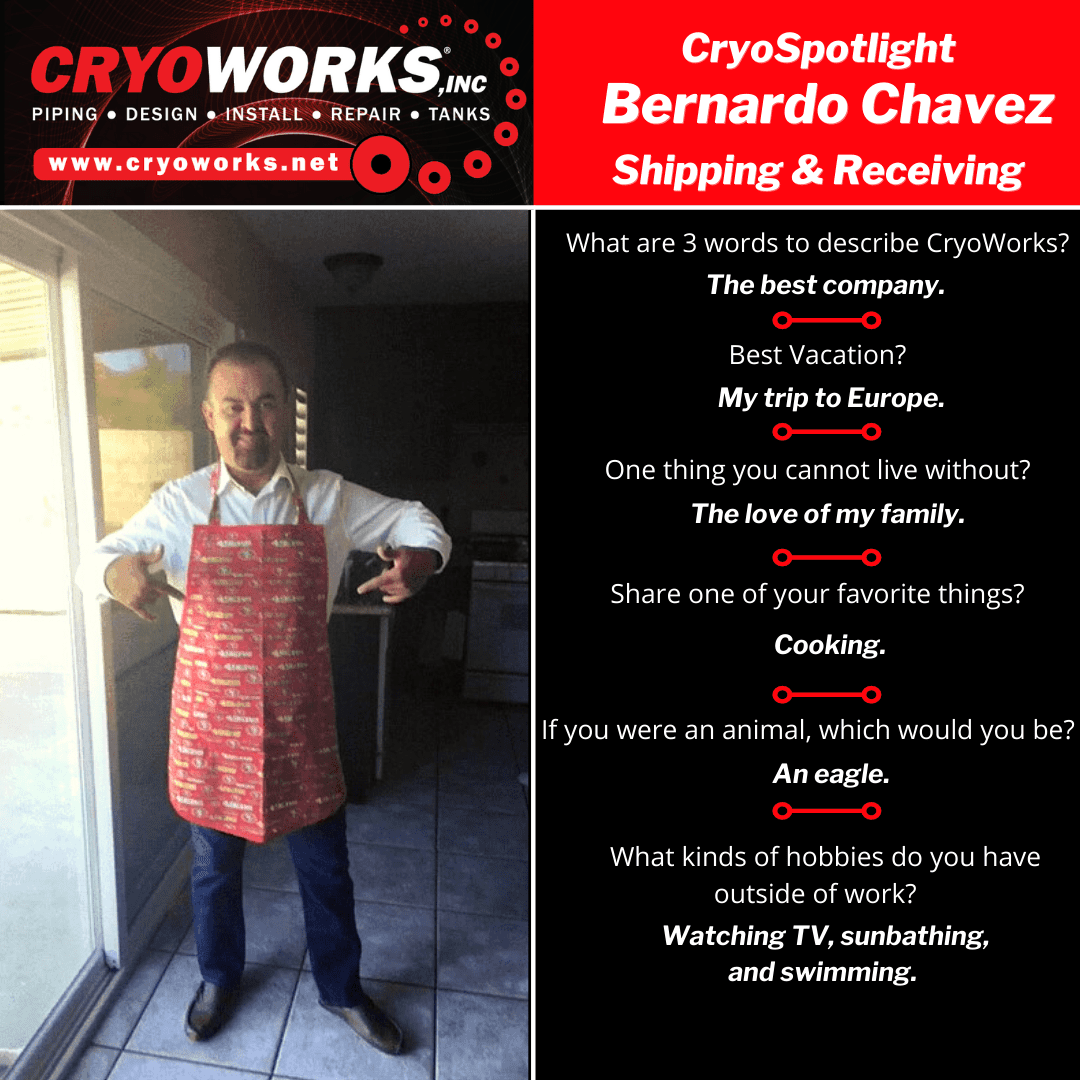 CryoSpotlight Getting To Know The People Behind The Pipes: Bernardo Chavez

CryoSpotlight shines bright on Bernardo Chavez, our Shipping and Receiving team member! When Chavez isn’t packing complex systems, he is found encouraging those around him, by saying “yes you can”!